This is the EGGcessory that you’ve been waiting for! We’ve created the ultimate expansion system for an EGG that will allow you to unleash your full culinary creativity! The NEW Big Green Egg EGGspander System facilitates an extensive variety of multi-tier and multi-zone cooking setups – we count over 40! – to easily utilize the full versatility of the EGG. Available now for the Large EGG, other sizes to follow! 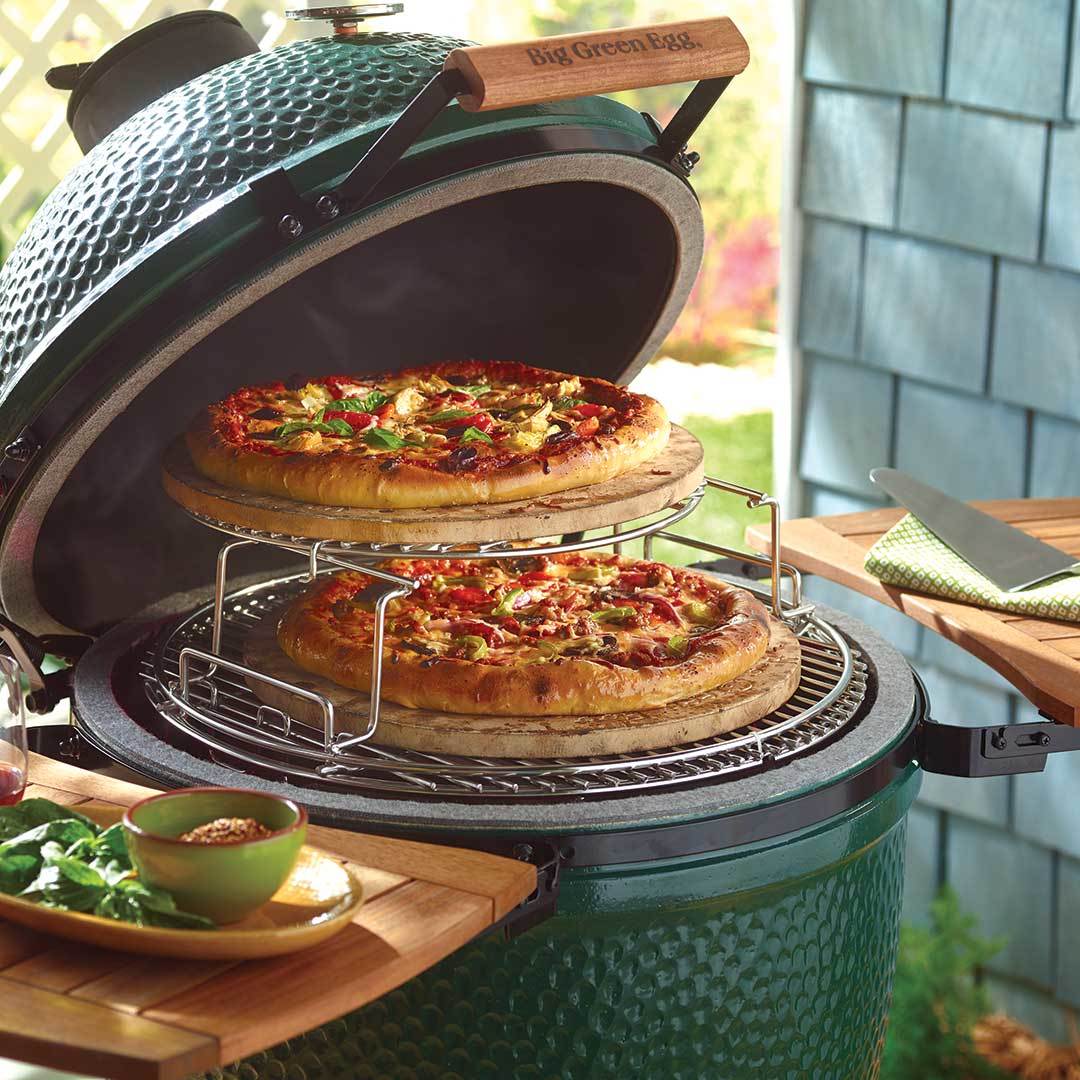 The Frame holds the interchangeable EGGcessories for over 40 different cooking setups.

There are three different frame options to choose from … you can start with one and add another later, or jump right in with the 5 Piece EGGspander Kit which includes all of the frame components.

For the most versatility the 5 Piece EGGspander Kit is recommended. This kit combines the 2-Piece Multi-Level Rack and the 1-Piece convEGGtor Basket and includes 2 Stainless Steel Half Grids for one complete cooking system. It is easily configured for multi-level direct and indirect cooking, direct “Cowboy style” lower rack cooking, and useful as a convEGGtor Basket.

The 2-Piece Multi-Level Rack is included in the 5 Piece EGGspander kit, but also available to purchase separately. This frame includes an elevated sliding cooking grid with 4 inch clearance for easy access, it reverses for low-level “Cowboy Style” grilling, and it is designed to connect to existing cooking grid. This rack is a starter component for the EGGspander System and it works with the 1 piece convEGGtor basket to complete the EGGspander system.

The third offering is the 1-Piece convEGGtor Basket, included in the 5 Piece EGGspander kit, but also available to purchase separately. Easily place or remove the convEGGtor from the EGG with this frame. It can also be used for multi-level direct and indirect cooking, as well as raised grid cooking. This frame option is a starter component for the EGGspander system. For the full EGGspander system the 2 Piece Multi-Level Rack is recommended.

We have developed five Half Grid options so each side of the EGGspander can be performing a different task. For instance, you can have the Cast Iron Half Grid on one side and the Half Moon Baking stone on the other so you are simultaneously direct and indirect cooking at the same time. If more space is needed there is an option to combine two of the same half options for the full frame.

The EGGcessories are sold separately and are interchangeable depending on what is needed during your cook.

Stainless Steel Half Grids – These grids accommodate multi-tier and multi-zone cooking set-ups. Made with 304 stainless steel, these Grids will hold up to extreme temperatures and are dishwasher safe for easy clean up. Two Stainless Half Grids are included in the 5 Piece EGGspander Kit.

Perforated Half Grids – These handy grids allow heat and flavor to reach the food and make it easy to cook fish or small foods like mushrooms, asparagus, shrimp or scallops that might fall through the standard cooking grids. The half grid leaves half of your cooking space available for direct heat.

Half Moon Baking Stones – Turn your EGG into a fire brick oven, great for making breads, desserts and other baked items. When you add a Half Moon Baking Stone, you can cook indirect on one half of the EGG, while keeping the other half of the grid available for grilling meats or vegetables. The stones are made with Big Green Egg Ceramics and when two are paired it creates a no burn zone convection cooking.

Cast Iron Half Grids – For perfect sear marks on your food, utilize the superior heat conductivity of the dual-sided Cast Iron Grids as an alternative to the primary Stainless Cooking Grids. The cast iron gets very hot and retains the heat, turning it into a perfect searing surface. Flip the grid over for a flat searing surface for fish or seafood.

Half Plancha Griddles – The perfect tool for adding sear marks and a delicious flavor-packed crust to foods! Use in your EGG for everything from blackened chicken and seafood, to grilled vegetables and steakhouse-style seared steaks … and when cooking breakfast, use the flat side for eggs and pancakes, and the ridged side for bacon and sausage!

2 thoughts on “The EGGspander System”